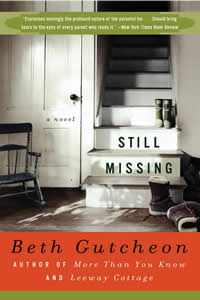 Alex Selky, going on seven, kissed his mother goodbye and set off for school, a mere two blocks away, He never made it. Desperate to find him, his mother begins a vigil that lasts for days, then weeks, then months. She is treated first as a tragic figure, then as a grief-crazed hysteric, then as an unpleasant reminder of the bad fortune that can befall us all. Against all hope, despite false leads and the desertions of her friends and allies, she believes with all her heart that somehow , somewhere, Alex will be found alive.

Beth Gutcheon builds a heartrending suspense that culminates in a climax you will never forget.

“Haunting, harrowing, and highly effective.. a stunning shocker of an ending….It strings out the suspense to the almost unendurable.”

“Expresses movingly the profound nature of the parental tie … should bring tears to the eyes of every parent who reads it.”
–Nora Johnson, New York Times Book Review

Click on the image below to read the conversation between Rachel Johnson, Hariet Gilbert and Martin Kelner discussing Still Missing on BBC Radio 4’s A Good Read.  (from the Spring/Summer 2012 Persephone Biannually, reprinted with permission.)

Read an Excerpt from Still Missing